Issues with the 4Kscore for Prostate Cancer
Stephen Leibowitz

The 4Kscore test screens for prostate cancer and is linked to the Gleason score. The Gleason score is a grade from 2–10 of a biopsy sample. The 4Kscore is a function of a blood test, patient age, and other variables. Expressed as a probability percent, it predicts the likelihood that a biopsy would yield a Gleason score ≥ 7. The 4Kscore compresses Gleason into two grade groups, <7 and ≥7. A low 4Kscore can justify not performing a biopsy. The problem with 4Kscores is that it dumbs down the result to a single probability number. In many cases, it is not enough to make well-informed decisions.

Here is a low-risk sample report:

The sample report shown above expresses the 4Kscore as a percent with only one significant figure. This is surprising because the vendor considers a 4Kscore of 7.5% to be the dividing line between low and elevated risk.

The 4Kscore blood test accurately identifies men with aggressive prostate cancer...
The above study had more than 1,000 patients who underwent a prostate biopsy. The 4Kscore was also calculated for each patient and summarized for three Gleason score groups. The table below shows the median 4Kscore for each group, and in parentheses are the interquartile range of the 4Kscores. The three groups show overlap in the interquartile ranges:

The table below is derived from the same study. It breaks down Gleason = 7 to 3+4 and 4+3. The second column shows the distribution of patients with respect to the Gleason scores. The third column is a reverse running total of the second column. It is the equivalent of % Patients with Gleason score ≥ n. The third column could be depicted as a reverse cumulative histogram. The table shows data for the group of patients. But it is suggestive of a probability distribution that could be useful if calculated for an individual. This is further discussed below. 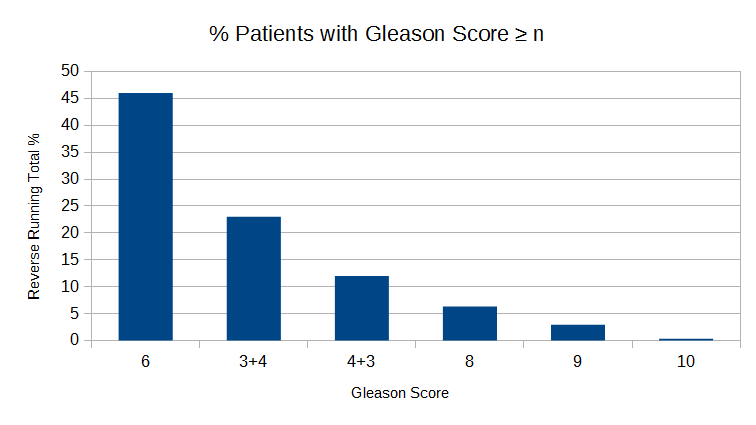 The low-risk sample report shown earlier had a 4Kscore of only 4%. It is easy to imagine a higher 4Kscore where decisions are not clear-cut. Knowing the Gleason probability distribution for an individual would lead to more informed decisions concerning biopsy, other tests, and active surveillance.

In particular, the 4Kscore vendor draws a bright line between Gleason scores ≥ 3+4 and lower. This downplays Gleason = 6. Instead, the vendor should be providing the maximum information that it can reliably calculate, including the Gleason = 6 probability. It should be the choice of well-informed doctors and patients about how to proceed.

The 4Kscore is a statistical model. It was developed from the analysis of patient data using the mathematical tool of regression. The vendor has publicly identified a panel of four blood biomarkers (kallikrein proteins) and other variables used in the calculation. The vendor calculates 4Kscores where the Gleason cutoff is ≥7, more precisely ≥ 3+4. It seems likely that they could perform a similar analysis to calculate the 4Kscore with other Gleason cutoffs. This would lead to an individual’s Gleason score probability distribution. The probabilities for Gleason scores 6, 3+4, 4+3, and ≥8 should be within their ability to calculate.