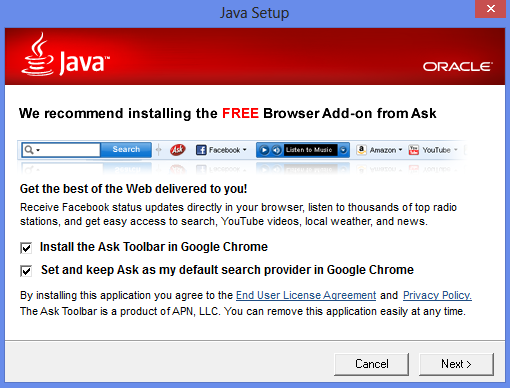 A company pays Oracle to bundle its adware software with Oracle’s Java. Adware could not succeed on it own. You would not separately download and install it. Some adware can be considered a fair tradeoff for the main software. An example are the ads that precede many YouTube videos. But there are other computer adwares that have generated such negative feelings that they are instead considered “crapware.”

The adware bundled with Java is crapware. In fact, a blog post by the computer industry firm Soluto described Java’s adware as “hated” by users and says that Oracle fleeces users with the adware.

I posted the following comment in March 2015 for the BetaNews article, “Oracle: How about some adware to go with that new Java for Mac?”

As the article indicated, this is not a new problem for Windows users. An earlier article can be found here: “The Ask Toolbar is another reason to avoid Java”

In January 2013, Oracle official Doland Smith “tried to soothe obviously ruffled feathers.” From a Computerworld article: “It’s something that we are looking at and constantly evaluating whether it’s worth doing,” he said. “What I can say is, we hear you loud and clear. We’re aware of the concerns and we’re looking at what we can do moving forward.”

He also tried to blame it on Sun Microsystems, the creator of Java: “This is not a new business, this is not something that Oracle started,” Smith said. “This is a business that Sun initiated a long time ago.”

In January 2013, Computerworld published the article, “Oracle will continue to bundle ‘crapware’ with Java.” Here is a slightly revised version of a comment I posted:

Oracle official Doland Smith said that Oracle had to abide by contractual obligations. Perhaps Oracle could not immediately stop the crapware installs after buying Sun. But it has owned Sun for three years, and closely monitored Sun during the nine-month approval period before the acquisition was completed. It should not hide behind old contracts.

From the article: Smith also defended the practice by saying Oracle had inherited the deal when it acquired Sun Microsystems, the creator of Java, in 2010. “This is not a new business, this is not something that Oracle started,” Smith said. “This is a business that Sun initiated a long time ago.”

Oracle seems to be rather selective in which business practices to continue. Sun had accepted Google’s use of Java in Android for quite some time before the buyout. Yet Oracle chose after it bought Sun to file a lawsuit against Google over that use.