In 2005, the Massachusetts Information Technology Division (ITD) announced a plan to adopt the Open Document Format (ODF) for state government documents in place of most Microsoft-developed formats. The only Microsoft format that the ITD considered to be sufficiently open was Rich Text Format (RTF).

Microsoft lobbied to derail the plan by pushing for the state to accept an alternative that Microsoft had recently developed, Office Open XML. As a part of those efforts, it advertised on the editorial pages of the Boston Globe and other publications in the state. Microsoft also published the ad on its website. The image from its website is shown below.

Microsoft’s ad did not mention ODF or Office Open XML, even though that was the focus of Microsoft’s lobbying efforts in Massachusetts. It was image advertising directed at Massachusetts. The author of the advertisement was the president of Microsoft. He first tried to soften up his Mass. audience by saying one of his two homes is in Mass. He goes on to say that he roots for the Boston Red Sox, even when they play against the home team in Seattle where he has his main residence. Also, he mentions the talent in Mass.: “steeped in talent” and “incredible talent.”

Microsoft brags in the advertisement that, “Worldwide, 750,000 software, hardware and services companies partner with Microsoft, innovating and building their businesses on its platform technologies.”

It is conceited for Microsoft to take credit for the IT economy outside of Washington state. The IT economy existed before Microsoft. It is not so brittle as to depend on Microsoft for prosperity. We have seen this to be true with the Internet, database software, server software, high performance computing, smartphones, smartwatches, etc.

A significant part of the IT economy consists of coping with the security vulnerabilities and other bugs that plague poorly designed Microsoft software. Even the incessant updates released by Microsoft to correct their software are not enough to deal with the problems. The problems provide jobs, but it is nothing for Microsoft to brag about.

Microsoft did not have many employees in Mass., but the ad plays up its “partner ecosystem” in the state. The ad says Microsoft’s “partner ecosystem includes thousands of companies that provide 40 percent of the state’s IT jobs and 40 percent of the state’s IT-related tax revenue. For every $1 of revenue that Microsoft generates here, another $9.91 in related revenue is earned by its partners in Massachusetts, according to IDC.”

Those “thousands of companies” in Mass. did not sell or service only Microsoft products. The revenue statistic is also worthy of comment. Microsoft was the most profitable IT company in the world. Microsoft’s ranking has fallen since then as smartphones and Internet services helped other companies, but it still scores high in 2019.

Office was considered to be a cash cow for Microsoft. The profit margin was thought to be high. A 2006 article said that 28% of Microsoft's $39.7 billion in yearly revenue came from use of Office software. Microsoft held more than 90% of the global market in office productivity software. It is not surprising that Microsoft would be opposed to ODF. ODF is a step toward a more level playing field for the creators of office productivity software.

The ad could be summarized with this paraphrase, “What’s good for Microsoft is good for Massachusetts.” It is not only patronizing, it is wrong. 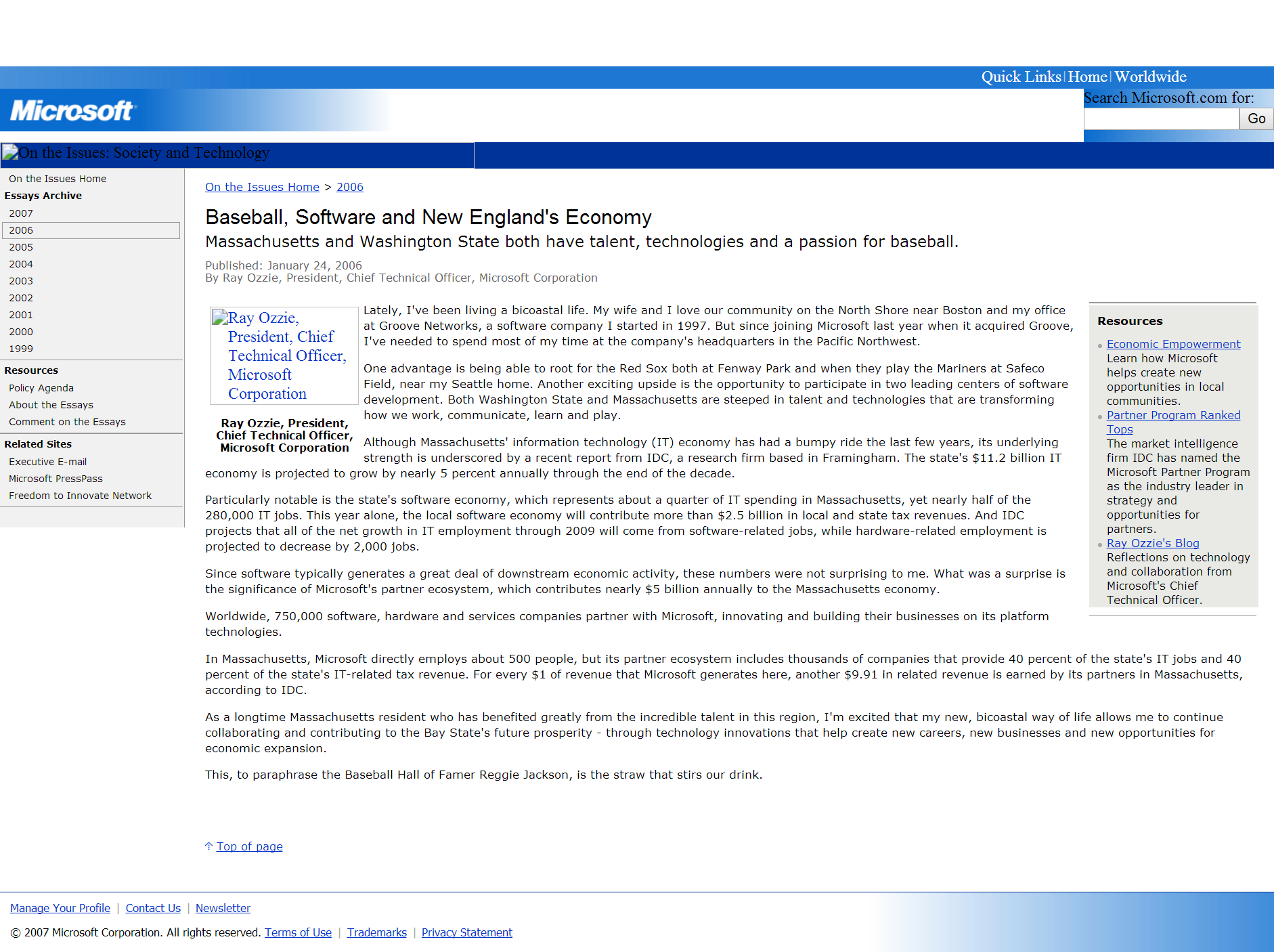