My Comments on the Oracle v. Google Lawsuit
Stephen Leibowitz

It is ironic that Oracle has sued Google over Java. Here is a quote from the InfoWorld article, “What is SQL? The first language of data analysis.”

In 1979, before IBM had even released its product, Larry Ellison incorporated the language in his Oracle database (using IBM’s pre-launch SEQUEL publications as his spec). SEQUEL soon became SQL to avoid an international trademark violation.

The Oracle database is the flagship product of Oracle Corporation. Ellison is the founder of Oracle and was the CEO at the time Oracle launched the lawsuit against Google.

Oracle acquired Sun Microsystems, the original developer of Java, in 2010. Later that year, Oracle sued Google. Like Oracle, Sun copied. The irony is less because Sun did not sue Google.

NeWS was a software product of Sun. Its principal authors were James Gosling and David Rosenthal. Gosling, who also authored Java, wrote “SunDew contains a complete implementation of PostScript.” SunDew is the original name of NeWS. PostScript was developed by Adobe Systems. Rosenthal. described NeWS as including a “PostScript language interpreter, with NeWS extensions.”

I posted a comment in 2012 for the Bloomberg article, “Google Needed License for Java, Sun’s McNealy Testifies.” Here is what I wrote:

Android’s Java implementation was derived from the Apache Software Foundation’s Harmony project. Apache announced Harmony in 2005. Sun could have sued Apache over their differences. That would have been more straightforward than waiting five years and suing a downstream user like Google. Instead of suing Apache, Oracle (which acquired Sun) donated OpenOffice to Apache after it filed the lawsuit against Google. This is strange behavior for a supposedly aggrieved company. Apache has less than $1 million in net assets. Oracle may talk about protecting the Java community, but it is clear that the reason for suing Google instead of Apache is money. The Oracle lawsuit makes Java look less open and discourages people from choosing it.

Google provided a boost to Java’s usage. And Google’s use of the associated APIs promoted interoperability between its Java implementation and others. Google had considered alternatives to Java, such as Objective-C (Apple’s choice) and C# (Microsoft’s choice). Its decision in favor of Java benefitted Sun/Oracle and the Java community.

I posted a comment for the ZDNet article, “Oracle, Google give closing arguments in Java API copyright case.” I also posted earlier versions of the comment on eWeek in 2012 and The Verge in 2014.

Chris Preimesberger was the author of the eWeek article. He replied to my comment:

editingwhiz
Excellent points, Stephen. thanks for adding them to the discussion. It will be very interesting to see what happens in this litigation.

It is easy to see how Google might feel blindsided by the Oracle lawsuit. For years, Sun’s CEO, Scott McNealy bragged of his company’s “open interfaces.” It was a major selling point for Sun and contributed to their success. Jonathan Schwartz succeeded McNealy in 2006, and was considered even more in favor of openness. Google released the Android OS in 2008. But Oracle acquired Sun in 2010, and sued Google over the APIs (application programming interfaces) that Google and many others thought were open. Here are some quotes from an Internet search with the keywords: McNealy "open interfaces" Java

“The two pillars that we live on are open interfaces and the network computing model,” McNealy explained to Computer Reseller News.

In an interview with Newsweek on June 21, 1999, McNealy discussed what he thought the U.S. government should do about its antitrust case against Microsoft. “They should force Microsoft to publish APIs [the rules of how to write programs for Windows] in a responsible, transparent way to the rest of the world,” he suggested. “That allows for interoperability, so that any innovation that we do can run on Windows. . . . I have yet to see a customer disappointed when there’s interoperability between two different pieces of technology.”
____________________________

From 2002
ABOUT SUN
Executive Viewpoint

“Sun solutions have always been based on open interfaces and industry standards -- an approach that promotes competition, innovation and customer choice. We believe that proprietary lock-ins (still being touted by some of our competitors) have no place in the network age.

What we're seeing instead is that the Web is taking charge. Its core technologies -- TCP/IP, NFS, HTML, HTTP, Java, Jini, XML -- are what power the new ".com" economy. They have become the international language of business, and we believe everyone should have access to the grammar, syntax, and alphabet of that language.” 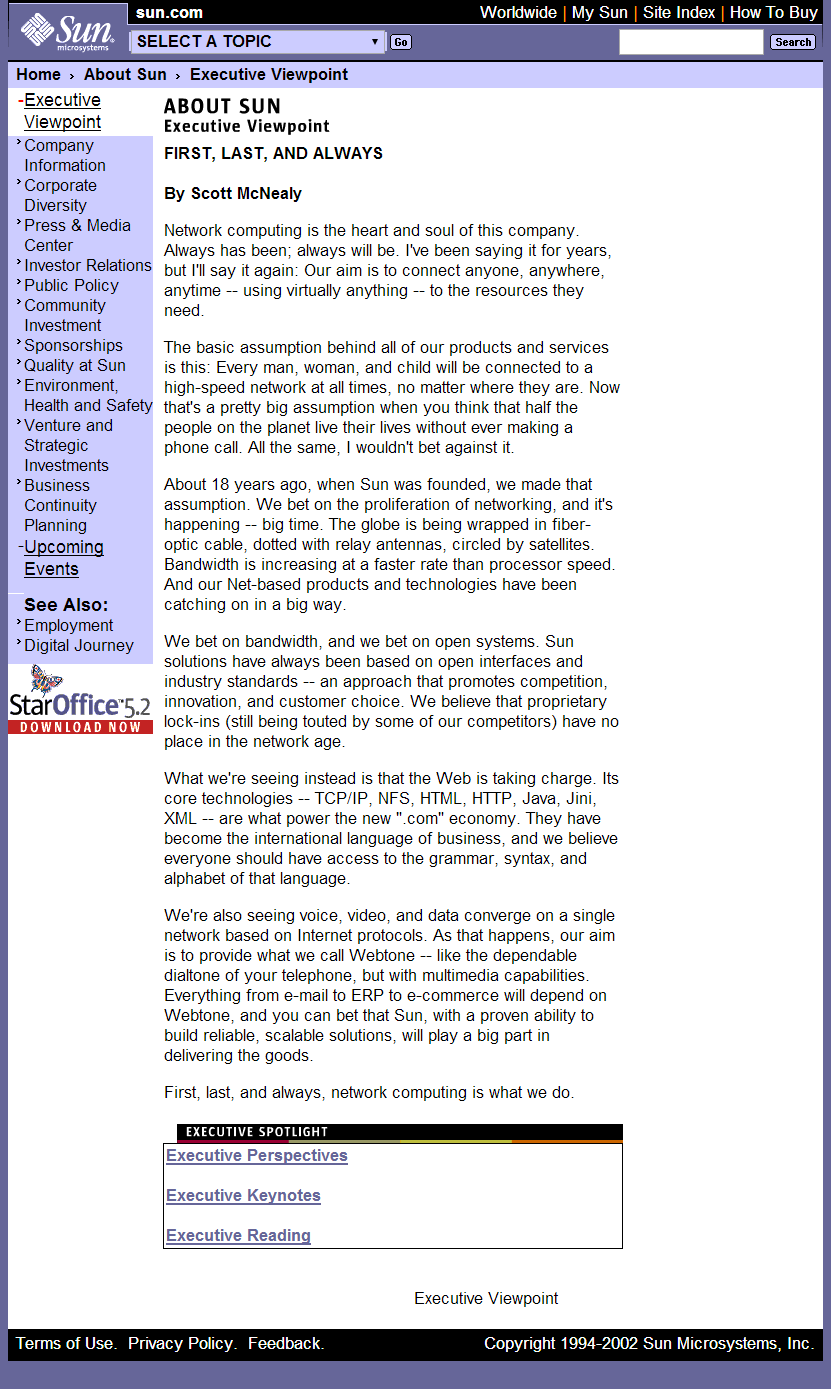